On  the weekend of 18/19th June four divers traveled to Newhaven for  a trip out on the charter boat Seazones skippered by Mick Luff. We cast off on a bright morning to dive the Lancer 2 a first world war wreck which sank in 1918 after a collision with HM Yacht Varant,the wreck lies upside down at 21m and is well broken up. As soon as we entered the water we could see that the plankton bloom was still about and on reaching the wreck we had about 2m vis, on going round the wreck we could see lots of marine life and plenty of crabs and lobsters hiding amongst the debris. The large boiler is still intact and standing proud is a great place for lobsters  hiding. On reaching the shot line we made our way back to the boat for a well deserved cup of coffee and scones. The second dive was a drift of 9-10m depth on entering the water we found the bloom was evan worse inshore we persevered for  20 minutes hoping it would clear but to no avail, back to the boat for more coffee and scones and back to shore for a debrief in the pub.

Day 2 saw us head out to the wreck City of Brisbane also lost in 1918 to a u boat UB-57. On entering the water we could see the viv was worse than the day before, so on reaching the wreck we lined off to the shot line after about 20 minutes we decided to cut short the dive and return to the boat. We decided to knock the last drift dive on the head due to the lack of vis and the  worsening sea state.

Thanks to Mark Billy and Dave, the rest of the dive team, and Mick for putting us right on the wrecks.  John. 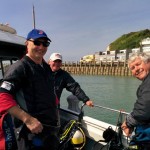