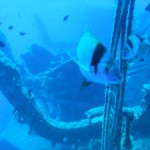 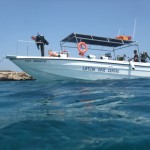 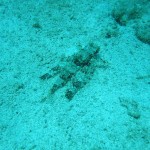 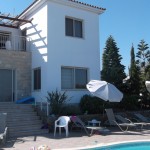 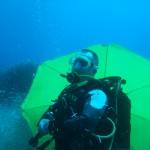 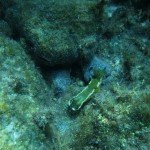 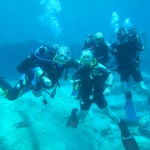 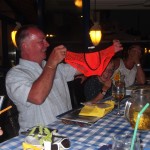 Three families traveled to Cyprus for 2 weeks  and 5 days diving, after arriving late in Paphos and collecting the cars we arrived at the Villa at 2.30am and promptly jumped in the pool to cool down. The first days diving saw us boarding Latchi watersports 2 week old dive boat which can take 17 divers albeit a bit crowded, luckily the boat was not full. The first dive site was St Georges Island west wall which drops from 10-32m, the first thing we noticed were sharp thermoclines which cut in about 5m with a temperature drop of 8-10 degrees,which made me glad I was in my 3mm long suit unlike Mark Billy and Thomas who were in there shorty suits, as with much of mediterranean diving there is not a lot of marine life. The second dive was in Amphitheatre bay an old roman stone quarry and in latter years a firing range for the british army, spent ammunition can be found alongside roman pottery. 2nd days diving saw us out to St Georges Island again to dive the east side then again the west side, nice gullies and swim throughs  but on the return on the east side hit a strong current which we were not expecting. The 3rd days diving took us to the other side of the island to Larnaka a two hour drive away over the mountains to dive the Zenobia a ferry which sank in Larnaka bay fully loaded in 1980, the gear was loaded onto the dive boat which goes out  to the site everyday, with about 40 divers onboard it was going to be a busy site. We kitted  up an jumped in only for me to have a freeflow on my octopus which could not be stopped, so I had to get  back onboard to change to a spare set of regs and renter the water. The wreck can be seen from the surface and was already busy with divers, on dropping onto the side of the wreck it can be seen to be complete with a lot of marine life around it.We dropped down the cargo deck allonge to the stern and down to the highest prop back along the hull looking at all the marine life on the hull, we ascended the static shot line for our 3 min safety stop and then back onto the boat. The 2nd dive was down the same sot line as the first dive onto the hull but this time swam to the bows of the ship along the top edge of the hull past the divots and broken life boats to the bridge area, then down to the anchors which were still in place keeping, an eye on the deco time we ascended once again to to top of the hull   and back to to shot line for the ascent to the 6 m safety stop and back to the boat for a well earned rest an a BBQ onboard. We had to have a debrief in a local bar before heading back across the mountains, this was so we would not stand the chance of a DCI when traveling at altitude. We now had four days off from diving to relax and see some of the island with the temperature of around 100 degrees most of the time was spent in the pool or on the beach with a trip to the water park in Paphos for the Sayward Jones group. The 4the and 5ths days diving was much the same as the first two days diving with trips to black rock, Fontana amorosa, St Georges reef and Amphitheatre Bay to finish off the diving, seen along the way were barracuda octopus nudibranch and several groupers, thanks to Latchi watersports for there assistance and to Johno and Peter for there guiding. The end of the holiday was fast approaching, but one last thing was on the agenda , Marks 56th birthday ( yes he is only that! not 59 as was muted ) which we went out to  a great restaurant  which I cant pronounce the name but which means Mr Moustache were he received a most interesting present which if seen in public he would be arrested. Thanks to Carly and Billy for arranging  this trip and for the great company of Thomas Phoebe Mark Angela Samuel and last but not least Chris.

This entry was posted in Uncategorized. Bookmark the permalink.